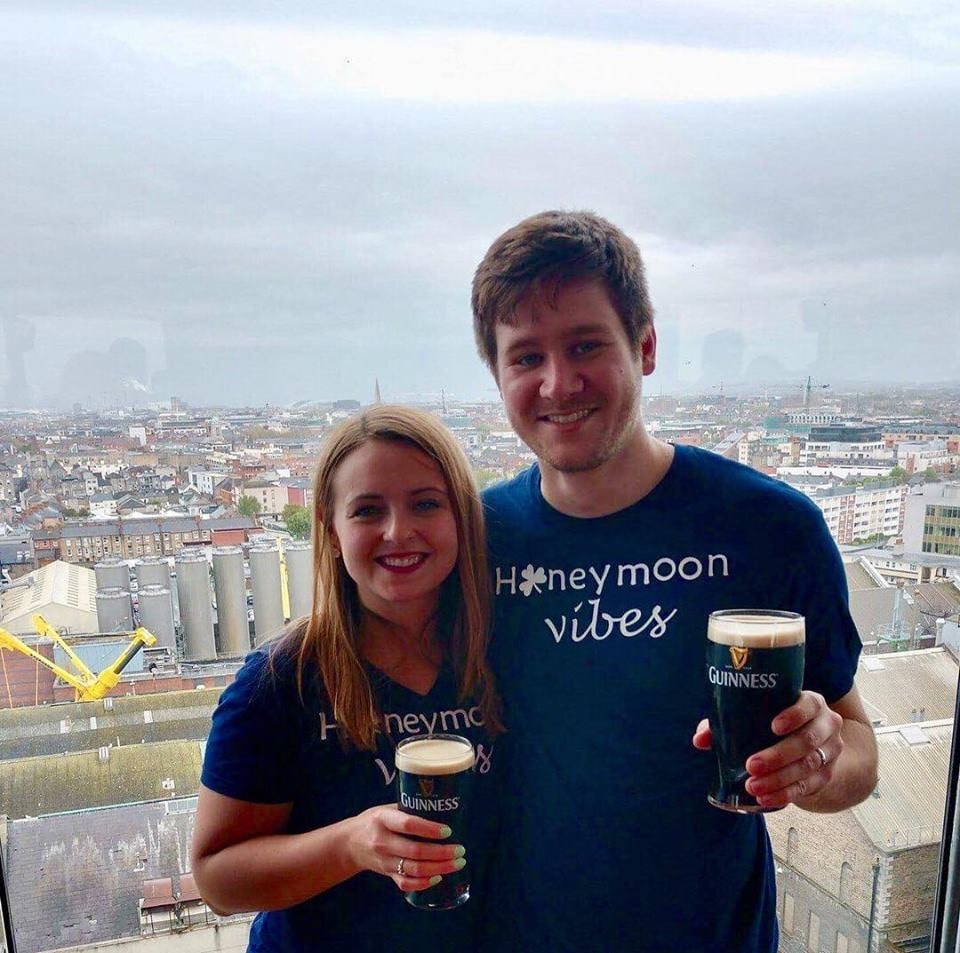 David: Our journey started in Dublin, and our base of operations was the Westbury Hotel, right smack in the middle of everywhere you want to be in the city. The Westbury was gorgeous, and we were welcomed heartily as soon as we arrived. They even brought us a little dessert with a decorated plate that wished us a happy honeymoon. The breakfast at the Westbury was also phenomenal, especially their red berries hot tea, which might be the best tea I’ve ever had in my life! I was excited to try the full Irish breakfast, which included thick-sliced bacon, sausage, egg, and grilled tomato.

In Dublin, we explored Trinity College and saw the Book of Kells, a medieval Christian manuscript with beautifully decorated pages. It was fascinating to learn how medieval monks would grind different vegetation and minerals to produce dyes with which they’d do their calligraphy.

Also in Dublin, we bought picnic supplies in a cute market called Fallon & Byrne, then walked over to St. Stephen’s Green and sat on the grass watching the ducks and people as we ate. This was one of my favorite things to do because it was fun to see the similarities and differences of what they carry in grocery stores. 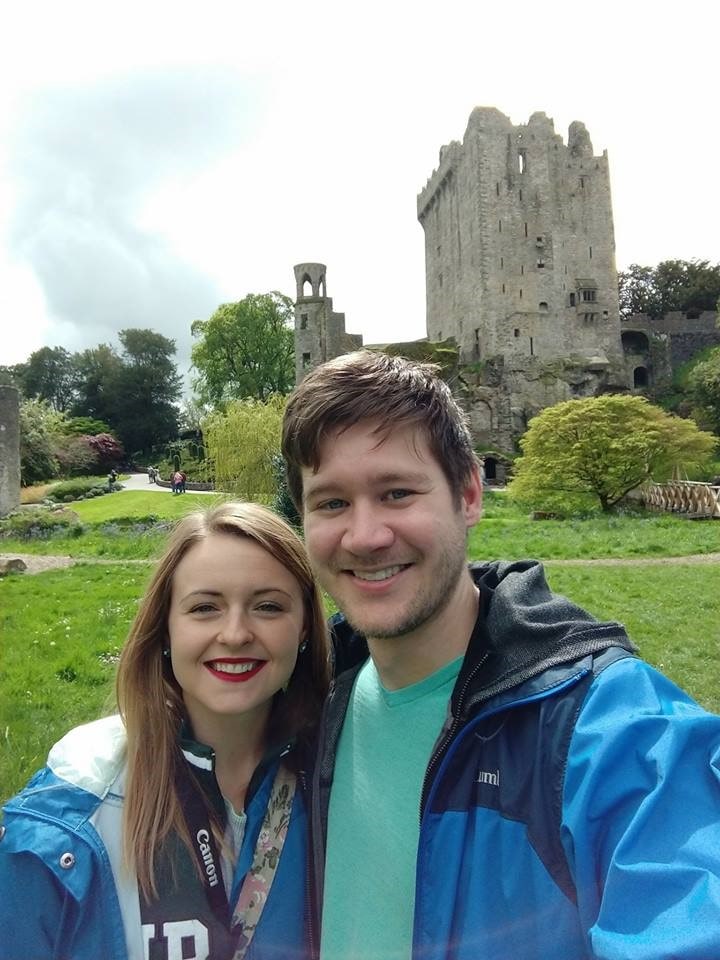 The best restaurant we went to in our entire trip was the Brazen Head pub in Dublin – known for being one of the oldest pubs in Dublin (dating to 1198). Ash and I both had bacon and cabbage over mashed potatoes. I’m not normally one to rave about cabbage, of all things, but this cabbage was the best I’ve ever had in my life!

After leaving Dublin, we rented a car and drove down to County Wicklow and looked out over the beautiful rolling hills and mountains. We saw hundreds of sheep as we headed to our B&B. We stayed at a little B&B next to a giant lake called Lough Tay, where we watched the most incredible sunset!

We had another one of our favorite meals at Byrne & Woods in the nearby town, Roundwood. Ashley had a seafood linguine and I had a roasted pork belly, and both of us enjoyed a pint of Guinness.

Ashley: For the record, Guinness really does taste better over there. Our trip to Dublin would not have been complete without a stop at the Guinness storehouse. It is an impressive building with lots of displays and exhibits, including a sensory room where you could smell the individual ingredients that make the beer. Our favorite part was learning how to pour the perfect pint and becoming “certified” Guinness pourers.

Dunmore Cave has a really interesting history including Vikings, hidden treasure, and a massacre, so we had to make a stop on our way to Cork. The walkable part of the cave isn’t that big, but our tour guide had grown up exploring it and had some great stories to tell. It was an eerie place, to say the least! 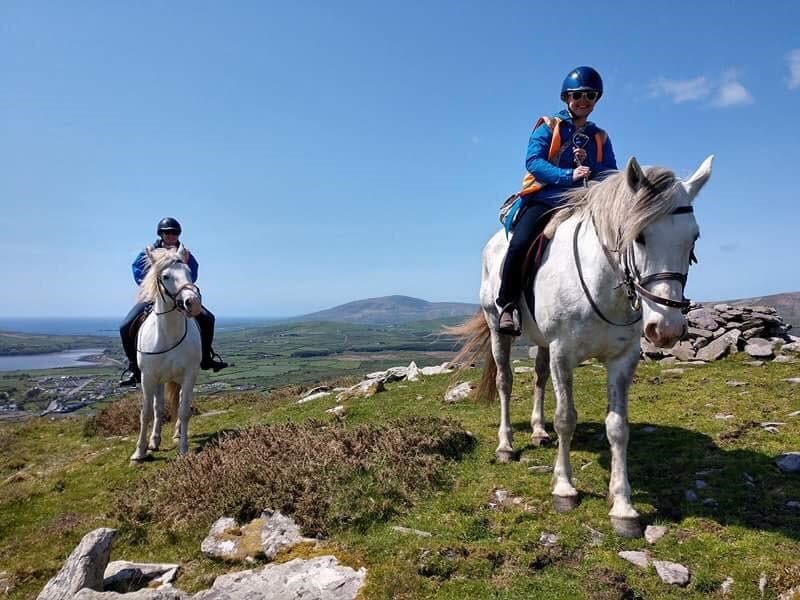 Ashley: We weren’t kidding about this trip being an adventure! Baltimore is a very small coastal town known for the Baltimore Beacon, a uniquely-shaped lighthouse marking the entrance to the harbor. We chose Baltimore so that we could do a whale-watching tour, which was really cool even though we didn’t see any whales.

The best surprise as we walked to town on our first night was that the annual Fiddle Fair was happening. Yes, you read that correctly – Fiddle Fair. Musicians came from all over to play, and we even met someone from Dingle who was in town just to enjoy the festivities. It was surreal and strange and magical to sit in a pub drinking the locally-made Murphy’s Irish Stout while watching musicians trickle in and join the jam session already in progress.

In Kenmare, we stopped at an ancient stone circle right outside of town. One of my favorite things about Ireland is that there is history everywhere – some history so ancient it is difficult to fathom! One of the things we were most looking forward to in our entire trip was taking a ferry to Skellig Michael, now known for being the island where Rey finds Luke in the new Star Wars movies. The opening date for tours, which is decided by the Irish tourism office, was supposed to be around the day we were going to be there, and we were heartbroken when it was pushed back due to renovations. That is one adventure still on our list! 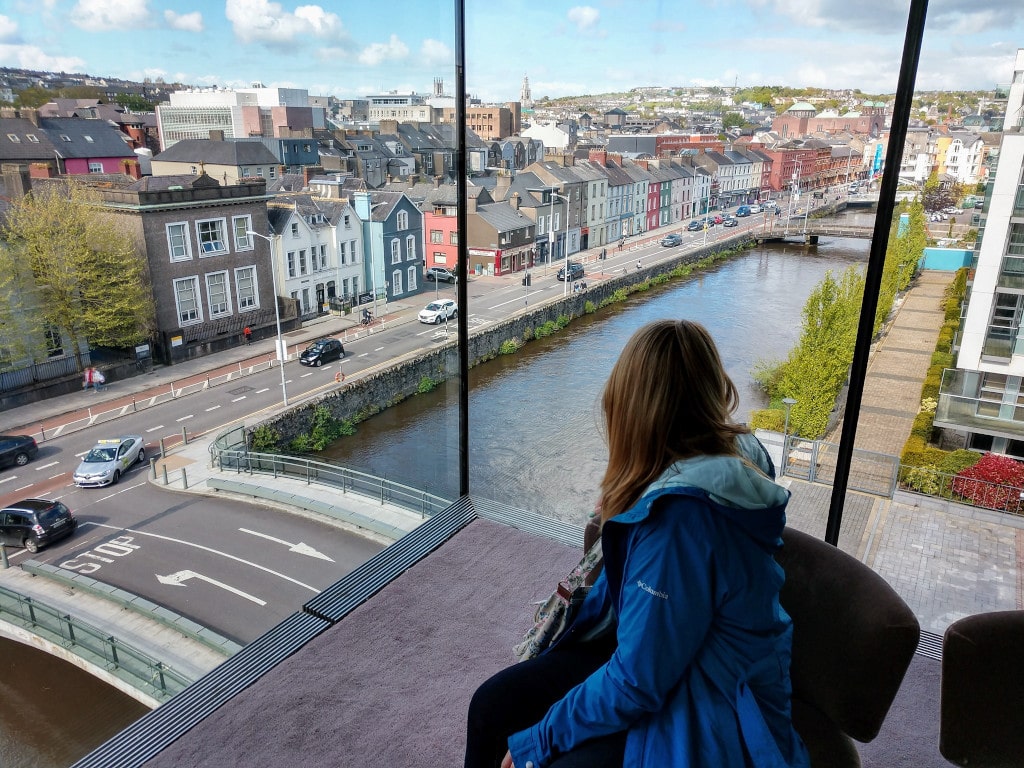 The upside to not seeing Skellig Michael was that we got more time in Dingle, which turned out to be our absolute favorite place in Ireland. We stayed at the Pax House, which, in addition to the very nice room, extremely comfy bed, and delicious breakfast, had the most friendly and helpful staff, and views of Dingle Harbour that you would not believe. I still look at pictures and can’t believe they’re real! Dingle has become a bit more touristy than some of the other places we went, but there were so many cool shops, great restaurants, fun pubs, and a delicious ice cream shop (Murphy’s).

Another surreal experience was seeing Dingle and the surrounding (majestic) landscape while riding atop Doire and Cookie with Dingle Horse Riding. The stars aligned and we somehow ended up with a private tour, just the two of us and our very friendly and knowledgeable guide Katie. I will admit that I may have had to wipe my eyes as we stood at the top of the hill feeling the warm sunshine and cool breeze while feasting our eyes on Dingle, the bay, ruins in the distance, and the endless green, rolling hills.

Later that day, with recommendations from our gracious Pax House host John, we had a delicious meal, poked around in shops, and then lucked out with front row seats for live music and a pub performance from world champion Irish dancer David Geaney. We had been advised to take our car down Slea Head Drive, which hugs the cliffs and overlooks the ocean, and we were not disappointed. Not only did we get an eye-opening history lesson when we explored the famine cottages and prehistoric beehive huts, but we got to snuggle a baby lamb at a roadside farm! 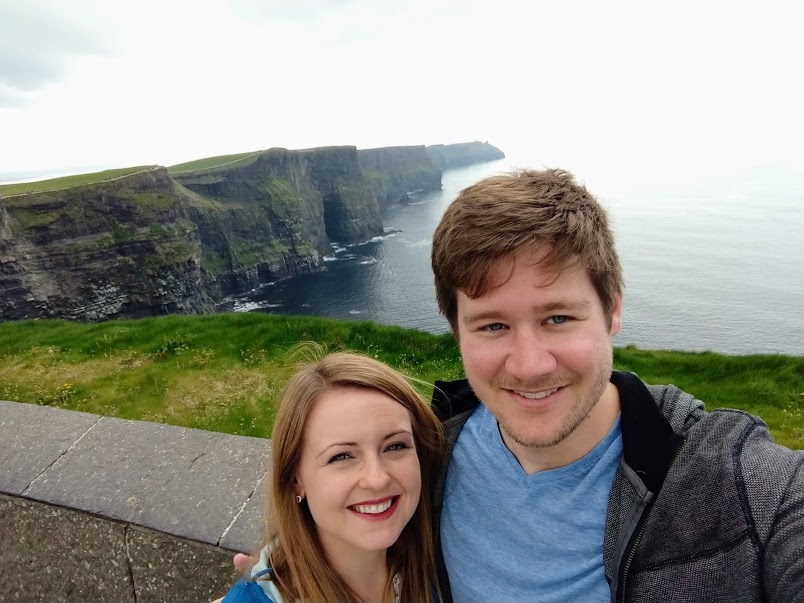 David: One of my favorite places in the southwest was Cork – a huge, beautiful city with a river running right through the downtown. We stayed at the River Lee Hotel and the view was beautiful. The entire city was colorful and bustling. We took a walk down to the famous English Market to check out the fresh meats, cheeses, and produce, then had fish & chips for dinner. Back at the River Lee Hotel, we went to the bar and ordered cocktails made with espresso and Jameson whiskey, which was probably my favorite drink in Ireland!

Just out of Cork, we visited Blarney Castle, and Ashley’s history nerd side took over. We spent the next few hours exploring the castle grounds and gardens, reading placards, and walking around inside the castle. It was so cool to learn about how people used to live, especially when we learned about structures like the deep, well-like building where they kept ice. Ashley wanted to kiss the Blarney Stone so we climbed up to the top, where you have to lie down and lean backward to smooch the rock for the gift of eloquence.

Just a few more places I want to mention specifically in this southwest region – all related to food: The Bookstop Café in Kenmare, the Skellig Chocolate Factory and Fisherman’s Bar & Skellig Restaurant in Portmagee.

The Bookstop Café was amazing. We stopped there for a little lunch and spent some time enjoying their coffee and recharging. I got a Mediterranean potato bruschetta. The atmosphere was really nice too – people relaxing and reading while sipping coffee.

As much as I wanted to go to Skellig Michael, not going there opened up some time that let us visit the Skellig Chocolate Factory in Portmagee. I love chocolate, and they did not disappoint! They had lots of free samples for us to try, and we ended up taking a lot of it home, including chocolate coffee stirring sticks and chocolate covered honeycomb!

I also want to give a special mention to the Fisherman’s Bar & Skellig Restaurant, also in Portmagee. Since fish & chips is a staple meal in Ireland, we tried it at many different restaurants over the course of the trip. However, the best fish & chips we had was at this restaurant, hands down. The fish batter wasn’t overwhelming, the outside was nice and crispy, and the flavor of the fish was fantastic. 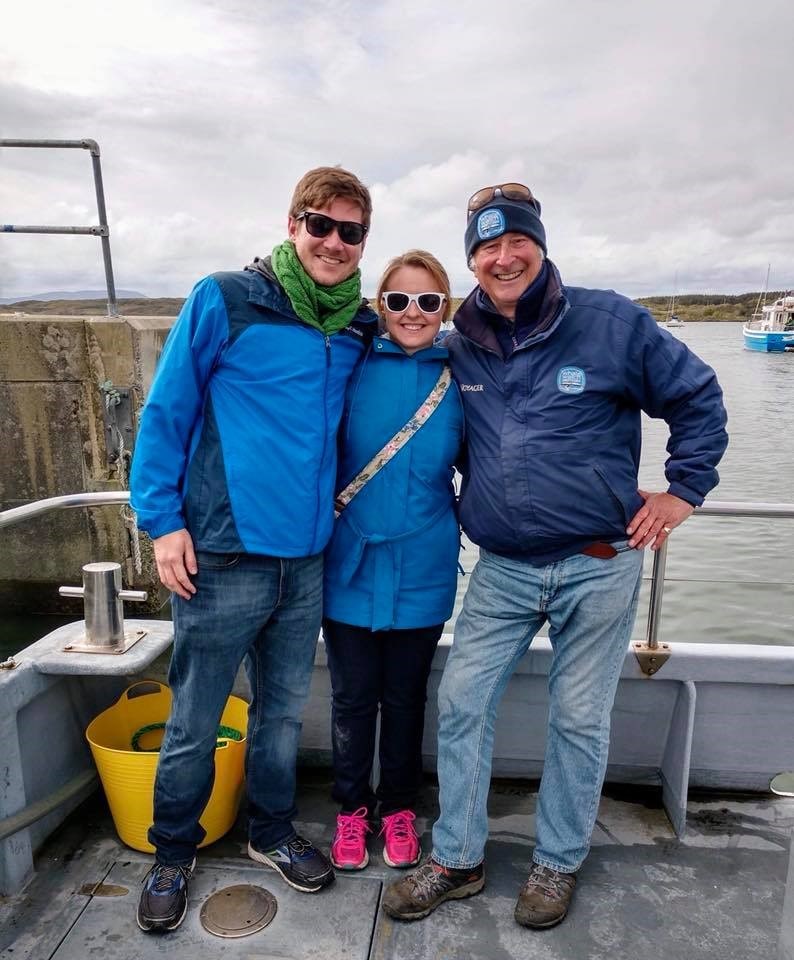 Ashley: Doolin is a tiny, tiny town that we kept hearing about due to its live trad music scene. We stayed at the Ballinalacken Castle Hotel, in the most amazing room with views of both the Cliffs of Moher and the Aran Islands. We ended up at McDermott’s Bar for a couple pints and some great trad music delivered by a talented trio.

Quay Street in Galway was the quintessential Irish/European street in my mind. There were so many shops, restaurants, and pubs, and music and colors everywhere. We apparently had just missed the Ed Sheeran celebration, as the “Paint the town Ed” banners were still hanging over the streets. We actually stayed in the room in the Heron’s Rest Boutique B&B that is featured at the end of the Galway Girl music video with Ed Sheeran and Saoirse Ronan. Naturally, we had to recreate the ending balcony window scene.

The Claddagh is actually a neighborhood in Galway that used to be a fishing village a long time ago. The original village was destroyed. At Katie’s Claddagh Cottage, we heard the origin story of the Claddagh ring, which involves a slave-turned-goldsmith and a long lost love.

Connemara is on the west coast of Ireland, and is known for being a more traditional Irish area. We stayed in the Ballynahinch Castle Hotel, a huge estate nestled in the woods overlooking a river. How much more romantic can you get?! The (gigantic) room, the friendly service, and the hotel grounds were so impressive. We had the fanciest meal either of us has ever eaten and we are still thinking about those scallops. 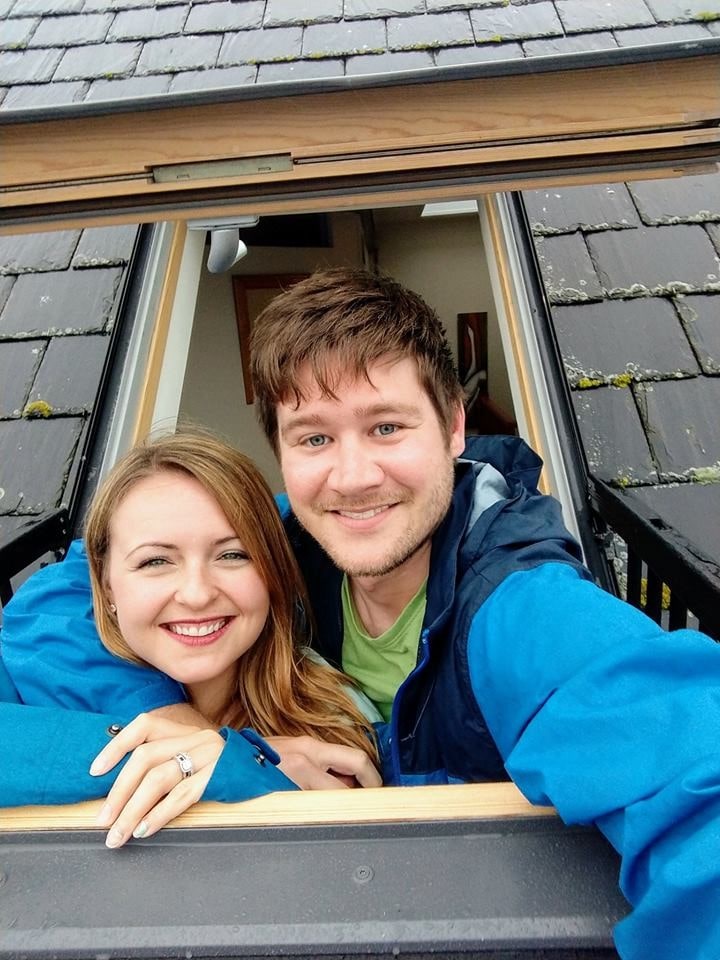 David: The west of Ireland was really all about the scenery for me. We started by seeing the majestic Cliffs of Moher, which was incredibly beautiful, although there were many tourists there. Driving in to Galway, we passed by the Burren, a really unique, rocky landscape unlike anything I’ve ever seen before. But my favorite was the long drive to Clifden, in the heart of Connemara. There were lakes and auburn hills rather than the lush green we saw everywhere else, and it was so cool to see so much variation compared to the rest of Ireland.

As you can see, Ireland has a little of bit of everything; adventure, wildlife, amazing scenery, hiking, shopping, great food, live music, history, outdoor sports and so much more. We did so much and there were still so many things we didn’t have time to do. The people we interacted with, particularly our hotel and B&B hosts, were extraordinarily friendly, accommodating, and helpful. Neither of us would hesitate to say Ireland is one of the most beautiful, magical places we’ve ever been to.